A simple structure, easy to use CNC plasma cutting machine

At present, there is a low work efficiency, which is not possible to complicate the metal plate, and it is necessary to further change.Plasma cutting machineIt is a method of forming the metal partial melting at the workpiece inlet by heat, using heat of the high-temperature plasma arc, and the machining method of forming a gap is removed by the momentum of the high-speed plasma. The apparatus can be used to cut various metal materials such as stainless steel, aluminum, copper, cast iron, carbon steel, and the like. Not only cutting flat, narrow cutting, small heat affected zone, fast cutting speed, low degree of deformation, simple operation, but also good energy saving effect. In the plasma cutting machine of the prior art, the X-axis rail and the Y-axis rail are composed of screws and nuts, and the screws and nuts pushed the corresponding X-axis fixing frame and the Y-axis fixing frame in the screw direction, and X The shaft and y-axis screw are in a rotational state. When the screw in the Y-axis direction is generally longer, the screw is easily jitter when the screw is rotated, and the head mechanism is jitter, resulting in inaccurate cutting positioning. 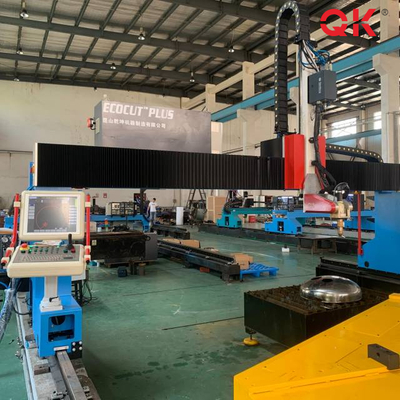 In summary, the utility model uses the number of controls described above.Plasma cutting machineEasy to use, simple structure, time and effort, solve the problem of screw shake, and reduce the labor intensity of workers.

A simple structure, easy to use CNC plasma cutting machine

After more than ten years of continuous efforts, we have delivered more than one thousand sets of various cutting machines, which create value for customers all over the world. Every year, nearly half of the machines are exported to Southeast Asia and Europe.